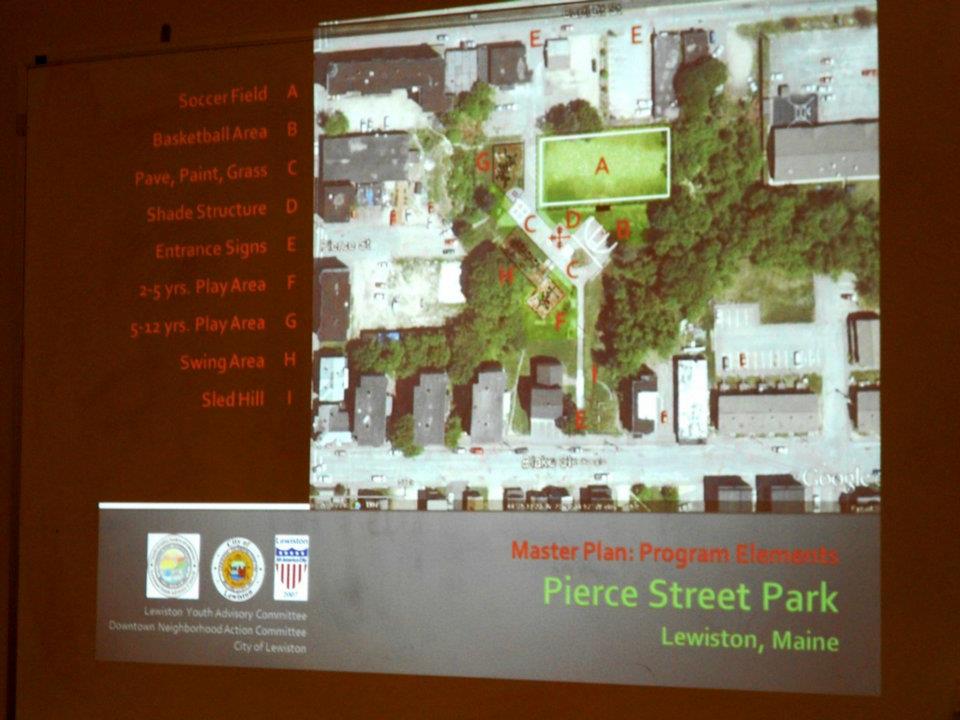 Pierce Street Park in Lewiston is going to have a new look! That was the overwhelming perspective of those who attended a public meeting on March 14, 2012, at the B Street Community Center. Attendees viewed a presentation on proposed enhancements that were collaboratively put together by the Downtown Neighborhood Action Committee (DNAC) and the Lewiston Youth Advisory Council (LYAC). Both of those entities have been information gathering since last fall, to include neighborhood surveys and meetings with users of the park on site. Harriman Associates landscape architect John Jacobson has volunteered his time and expertise to put together a visual of all the data the two groups put forth.

Committee, facilitated the meeting and noted, “The Pierce Street Park meeting was an excellent event, in which we saw local business owners, police, and children who use the park all together in the same room talking about how to make the park a better place. It was really exciting to see people's enthusiasm about how much use the park has been getting lately. It was also great that we had some clear consensus about the development plans for the park, which begin with improving the soccer field and installing places to comfortably sit and have shelter from the sun. The Downtown Neighborhood Action Committee will soon begin our fundraising effort to leverage $25,000 of CDBG funds for the revitalizing of the park."

Adilah Muhammad, Chair of DNAC, said it is hoped that enhanced neighborhood stewardship will develop as the park project proceeds, adding that neighbors will hopefully take pride in and have a sense of ownership towards the energized park.

Marissa Zanoni, a member of the Lewiston Youth Advisory Council, also announced a “Name That Park” contest for Lewiston elementary school children, noting “We also think the park should have a more attention-getting name.”

K-6 children are urged to submit a name suggestion and the reason for their suggestion. The winning entry will either be the new name for the park or be announced as the entry that “inspired” something a bit different. LYAC will be deciding shortly on just what the winner’s prize will be; however, Councilor John Butler assured the youth in attendance, “We’ll come up with something really good!” Neighborhood youth were quite vocal at the meeting, some of whom were previously interviewed by youth council members when visiting the park.

Name entries may be submitted via email at dottie@lewistonmaine.gov or by mailing an entry to the Lewiston Youth Advisory Council at Lewiston City Hall, 27 Pine Street, Lewiston, 04240 Each entry should also include the student’s name, age, school at time of entry, and contact phone. It is not known at the present time if the park will be named either before or after the completion of initial park enhancements.